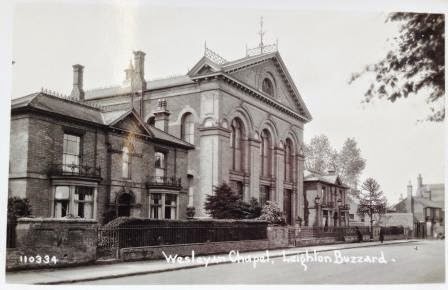 Tuesday 12th January 1915: A batch of new recruits for the 63rd Brigade have arrived at Leighton Buzzard from Lincoln.[1] To free up billets in the town for the new arrivals 362 men who are already well advanced in their training have been moved out to the villages of Stanbridge, Tilsworth and Eggington.

The Wesleyan Schoolroom in Hockliffe Street is being used by the troops for various purposes. On Sunday evenings a regular social hour is held there which is attended by a large number of soldiers. The bandsmen of the West Yorkshire Regiment practise in the Schoolroom and since last Friday it has also become the paymaster’s office. Thanks to a spell of wet weather it is even being used by the Somerset Regiment for drilling and signalling. On Sunday the services at the Wesleyan Church were conducted by the Wesleyan Chaplain to the 21st Division, Rev. G. H. Crossland, who is stationed at Aylesbury.

Across the road in the Hockliffe Street Baptist School Hall concerts were given for the soldiers on Wednesday and Thursday evenings. Wednesday’s entertainment had a popular theme while Thursday’s concert by the Church choir was more classical. The highlights were a solo with instrumental effects titled “The Bassoon” performed by Mr H. O. Kitchener, and renditions of “Your King and Country want you”, “You are my baby” and “On the Mississipi” by Miss Dulcie Griffin.

Source: Leighton Buzzard Observer and Linslade Gazette, 12th January 1915
[1] The 63rd Brigade was part of the 21st Division and was made up of the following battalions:
8th Battalion Lincolnshire Regiment
8th Battalion Somerset Light Infantry
12th Battalion West Yorkshire Regiment
4th Battalion Middlesex Regiment
10th Battalion York and Lancaster Regiment.
The Brigade arrived in France in September and first saw action at the Battle of Loos at the end of that month.
Posted by Kathryn at 07:00