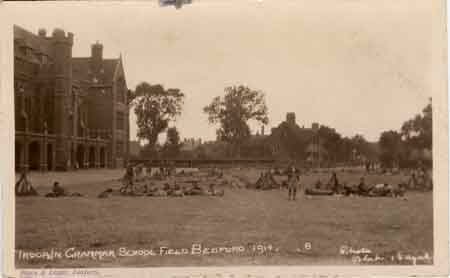 Wednesday 6th January 1915: There have been a number of casualties among the Old Boys of Bedford Grammar School serving at the Front. David Inglis, a Captain in the 4th Gurkha Rifles was killed in action on 21st December 1914 and Captain M.K.Sandys was killed leading an attack on a trench at Le Touquet, near . Captain Peter “Pat” Benson Maxwell went to with the East Yorkshire Regiment on 7th September and was severely wounded in the on the 20th of the same month. He managed to crawl back to the trenches and was taken to a Field Hospital where he passed away on the evening of 23rd September. Pat had married his wife Eileen, daughter of Major-General Hamilton Gordon in 1912 and leaves a daughter, Joan, aged 14 months. In more cheerful news Second Lieutenant G.G.R.Williams of the Loyal North Lancashire Regiment, who had been reported wounded and missing in , has now been reported to be a prisoner and is said to be doing well.

A number of Old Boys have written with accounts of their experiences. Captain B.O.Smyth of the Northamptonshire Regiment  sent thanks for the copy of the school journal Ousel he received just before Christmas. He says that he “sailed from on 4th November, and after a few days in a rest camp at the base, the regiment came straight up to the front. There has not been very much in the way of fighting going on since our division arrived, and our worst enemy now is the rain, which bids fair to inundate the whole country, which is as flat as a pancake. Our battalion was in the trenches on Christmas day and took part in the impromptu proceedings that followed the truce. Apparently, this state of affairs, although not arranged between the higher military authorities of both sides, was agreed upon locally. A certain number of both our men and the Germans came out of the trenches, and exchanged gifts of cigarettes, bread, jam, etc. One division, I am told, took the Germans on at football, but we have not yet got the results. Whether this sort of break in hostilities is a good thing or not I am unable to say. Perhaps it would make a good subject for discussion at the next meeting of the School Debating Society.” 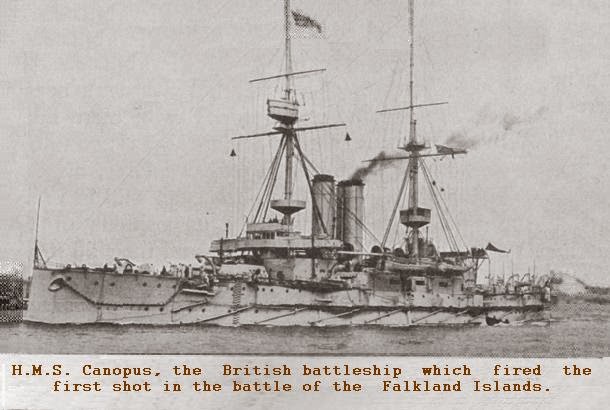 Another Old Boy is serving in the South Atlantic on H.M.S.Canopus.[1] On 1st November he took part in the Battleof Coronel off the coast of where the Royal Navy was defeated by Vice-Admiral Graf Maximilian von Spee. H.M.S.Canopus then returned to defend the , which at first the fleet feared were already under German occupation and which were at grave risk. On December 7th a fleet of reinforcements arrived; when they engaged the Germans the next day they won a splendid victory.[2] Our correspondent says “it is fine to have been in action, and you should have seen them scoot”. The is now full of German prisoners.

[2] At the Battle of the Falklands all but two of the German ships were sunk. German casualties included Admiral Spee and his two sons.
Posted by Kathryn at 07:00