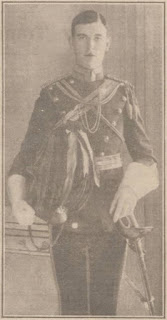 Tuesday 4th January 1916: Congratulations are in order for Lieutenants Harold and Alexander Wernher, two of the three sons of Lady Wernher of Luton Hoo. Harold Wernher, who has been serving in France with the 12th Royal Lancers since the beginning of the war, has been mentioned in dispatches for gallant conduct in the Field as one of just four officers from his regiment singled out by Sir John French for that honour. Alexander Werner, aged just 18, has been serving with the Buckinghamshire Hussars. After three months working on the staff of the 1st Army he has now been officially appointed to the staff of General Sir Horace Smith-Durrien and has left with him for South Africa. 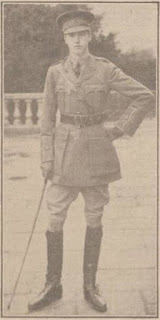 Lieutenant Harold celebrated his 21st birthday in 1914 with three days of functions and entertainments at Luton Hoo, at which a number of presentations were made to him by the Luton Corporation and other local bodies. He had hoped to be able to take a close interest in local affairs but has been prevented from doing so by the war. At his brother’s coming of age celebrations Alderman H.O. Williams of Luton proposed a toast to Alexander, in which he referred to the part played by younger sons had in the spread of the Empire and looked to the young man to play his own part in the service of the nation. Given the part Lieutenant Alexander is now to play in the German East African campaign, the Alderman’s words seem prophetic.