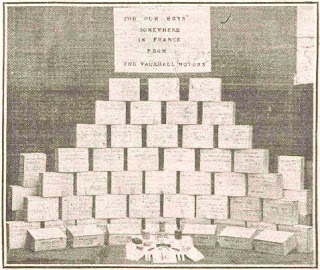 Friday 19th November 1915: Skefco employees have been subscribing to a fund which grants allowances to the dependents of fellow workers who are on active service; all donations are matched by an equal amount from the company. As there was a healthy balance in the fund it was decided to send packages of comforts for the troops of the 1st/5th Bedfords at Gallipoli. A letter of thanks has been received at the Skefko Ball Bearing Works in Luton from Lieutenant-Colonel E. W. Brighten, the commanding officer of the 1st/5ths. He says:

“I think you for your letter of the 21st September, and have delayed answering until the parcels of smoking requisites and chocolates and other sweets came along. I hasten to write to thank you for your very kind thoughts, and on behalf of my men to express my very best thanks. It is very kind of you to go further and to enquire what my men are essentially in need of. I think we may take it that in the clothing and necessaries line we shall be looked after all right by the ordnance and Supplies Services, which are top-hole, and in spite of the difficulties of transport, etc., both by land and sea, the right thing seems to arrive just as it is wanted. … It is cigarettes, sweets and other little luxuries that the men most want and like, and that is why your parcels were so acceptable because they contained these things.”

The Skefco men also intend to send a Christmas gift to each company employee now serving with the Colours and the men of Vauxhall Motors are also doing their best to ensure that their men now serving their country are well supplied with extra comforts. Not to be outdone, the girls employed at Skefco have collected 1,000 cigarettes and a quantity of tobacco from their male co-workers for the men of the 1st/5ths. Lt-Colonel Brighten asks Miss R. M. Roberts to “convey my very best thanks on behalf of my officers, N.C.O.s and men to all the girls of the Skefko Works who have subscribed … We have been reading in the papers which have just reached us of the great effort that has been made in Luton to get recruits for us, and we hope the girls at Luton will do all they can, as well as sending us cigarettes, to make the men come along out here to smoke them.”