A Royal Command For Bedford 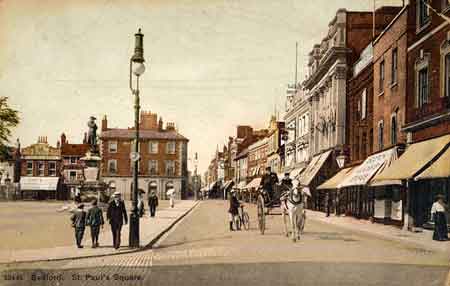 Sunday 28th November 1915: Earlier this month the Bedfordshire toy industry was honoured to have received a command from Buckingham Palace to send a selection of toys from which Queen Mary, Queen Alexandra and Princess Victoria would make a choice. A number of models were sent and from these a Red Cross hospital, a coster cart with a tray of vegetables, a dancing Highlander, a little painted cradle, an alphabet, and “The old woman who lived in a shoe” were selected. Queen Mary ordered a very complimentary letter to be written expressing her pleasure with the toys she had seen; she was most impressed by the skill acquired in such a short time by the village women who are new to this craft. Many of the models now being produced have been on display at the Englishwoman’s Exhibition at Central Hall, Westminster. These are now to be displayed at Bedford at the Depot, 15a St Paul’s Square from Monday 13th December to Friday 17th December to give people in the local area the opportunity to view them. It is hoped that people will be able to buy Christmas presents for children without going further afield.