Young Welsh Soldier Killed by a Mule at Bedford 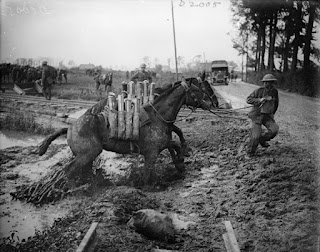 Saturday 14th August 1915: The Coroner’s Court at Bedford heard today how one of the Welsh soldiers billeted at Bedford lost his life in a tragic accident. Driver John Rice Jones of the Welsh Divisional Ammunition Column was badly kicked while grooming a mule on Friday August 6th and was admitted to the Bedford County Hospital. The House Surgeon, Dr. Spense, was away when Jones was admitted; when he first saw him on Sunday night the young man was suffering from general peritonitis as a consequence of a ruptured intestine. This led to the eighteen year old soldier's death on Thursday.

Lieutenant Godfrey Parsons of Driver Jones’ section was on duty on August 6th and watched  as his men groomed some of the mules. The mules were tied to trees due to their viciousness - or, he said, perhaps nervous would be a better term, it was the nature of mules which were far more difficult to manage than horses. Jones had been a groom and had considerable experience of horses. He saw the mule kick Jones, who staggered and fell down. Lieutenant Parsons examined him, found a wound over the abdomen and sent for a doctor.

Mary Jones, the young man’s mother, said that she last saw her son a fortnight ago, when he left home after a leave of absence. He had joined the Territorials because he was anxious to join the Army. She is a widow, and he was her only son. The Coroner said it was an extremely said case, and that the lad had joined the Army under age out of patriotism. The boy had done his duty, had died in a noble cause, and his life had not been lived in vain. The jury returned a verdict of “accidental death”. Driver Jones’ body was conveyed from the Hospital to the railway station on a gun-carriage this morning and sent by train to Newport, Monmouthshire for burial.