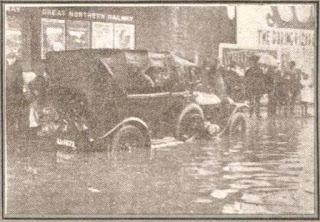 Tuesday 10th August 1915: A tremendous storm hit Luton this afternoon with thunder, lightning and torrential rain lasting over half an hour. The New Bedford Road was flooded from Mill Street to Alma Street, with water a foot deep under the Great Northern Railway bridge. Storm water rose up through the manholes, lifting the cover off one which became wedged under the base of a tram and was dragged along by the vehicle. There was more flooding at the corner of Old Bedford Road and Mill Street, in the lower part of Church Street and elsewhere. Fortunately the new storm water system for the Dunstable Road district has recently been completed and that are escaped the flood. The River Lea has overflowed onto the Moor and has reached the top of some of the bridges. Houses have been inundated with water in Russell Street, Upper Wellington Street, and Leagrave Road, causing damage to furniture, and water is being pumped out of warehouse basements in John Street. Nearly the entire moulding shop at the Davis Gas Stove Company in Dallow Road, which covers an area of three acres, is under water and work has been stopped, causing considerable delay and expense. The house of Mr. C. Stokes at 104 Albert Road was struck by lighning; bricks from the chimneys fell into the kitchen and sitting room hearths, but nobody was injured.