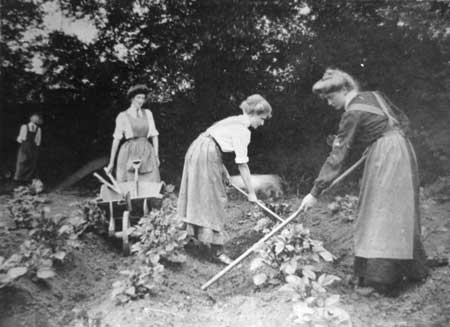 Sunday 2nd June 1918: Yesterday was Maiden’s Day in Luton, as members of the Women’s Land Army held a recruitment  drive. A bit platform was built in front of the Town Hall, and the building was adorned by banners with slogans such as “Men in the field; women in the fields”. A contingent of land girls wearing smocks, breeches and leggings paraded into the town and took up positions behind the speakers on the platform. One of the speakers was a Miss Bedford, a land worker and member of the National Service Corps (made up mostly of teachers), who has been working for a long time at Manor Farm, Caddington. She described how she and her colleagues have worked in all weathers, and slept in a leaky barn until accommodation could be found for them. Their employer could not speak too highly of them. She said she wanted the “sporting girl” who “can keep her lips up when everything goes dead wrong”.

The committee formed to organise the event where keen to go one better than Bedford, where a similar demonstration was held a week ago. The Mayor told the crowd that at least 30,000 women were needed immediately due to the shortage of men on the farms. Lady Trustram Eve made it clear that the country depended on women to win the war. For every man who went to the trenches a women was needed here to do his work. England was now producing more food than ever, and this required more labourers. The men at the front must be fed! It was hard work with no place for the wrong sort of girl, but she believed Luton would turn out the right sort, able to do men’s work. They would have to get up early, and would get muddy and dirty, but it was a healthy life. Councillor Primett advised girls to try the work as “It is one way to get a husband. The young ladies who will take the best husbands will be those who have joined the Land Army”.

As a result of the event about sixty new recruits volunteered. This is considered a satisfactory number for a town like Luton.