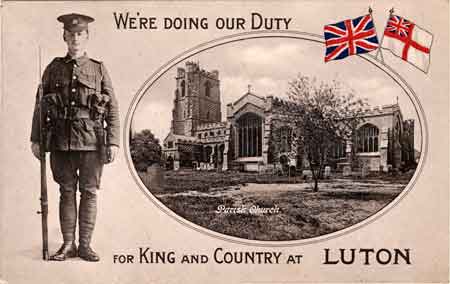 Monday 17th June 1918: Bert Groom of Luton has written to his father at 52, Lea Road, describing how he met his three brothers in France, where they are all on active service:

“Just these few lines to let you know I am quite all right … I found John again, and took him to see Albert, and Albert took us to see Stan, who is only about ten minutes’ walk away from himself, and all the four of us were together for the first time for so long. And I think we were very lucky, for the very next day we had to shift, so now me and John are over fifty miles away from Albert and Stan.”

The brothers’ father, Mr. Arthur Groom, is himself an old soldier; he served in India, and retired from the Army last year.