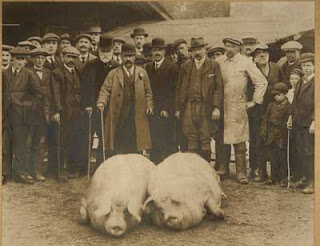 Wednesday 6th March 1918: A case of bacon hoarding has been reported at the Bedford Food Control Committee. A man had called at the office and stated that he had purchased 140lbs of bacon in November and another 40lbs in January. He had been in the habit of purchasing a pig-and-a-half at a time for the past seventeen years. He also had about one hundredweight of potatoes, and at first said he had a sack of flour but then changed his mind. He had been instructed to send in a full return of what food he possessed but had not done so. There were three people in his household. The Committee decided to seize al the bacon except 20lbs, and send it to the two Voluntary Aid Detachment hospitals.