A Flight in an Airship 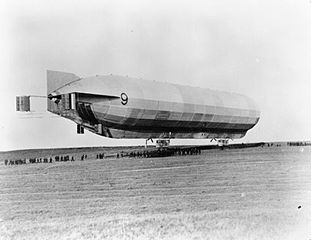 His Majesty’s Airship No.9 [Wikimedia]

Friday 15th March 1918: Private Percy Avery, a baker from Leighton Buzzard who joined the Naval Air Service two months ago, was among the crew of two 600 foot airships which sailed over London during the Business Men’s Week campaign recently organised by the National War Savings Committee. He has written to his parents in Ashwell Street describing the experience:

“I have had my first flight in our airship, No. 9, 1000 horsepower. It was simply lovely. We were up in the air 9 hours, and covered a distance of 350 miles. Our journey was to London dropping leaflets. We came as far as Willesden, circled all round Wormwood Scrubbs, went all over the Strand and Westminster. I can’t explain to you on paper what it was like. I am going up again tomorrow (Sunday), out to sea, by the Wash. I have been very excited since the officer told me I was to go up with them. In a good many places we dropped to 250 feet from the ground, and could see everybody running out of their houses and people stopping their horses and motors to have a look up, because our engines make such a noise.”

His Majesty’s Airship No.9 is an experimental rigid airship built by Vickers Limited at Barrow-in-Furness. It made its first flight on 27th November 1916 and is currently stationed at Pulham in Norfolk.