Tragic Year of a Luton Father 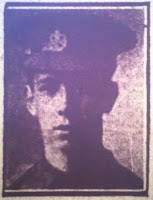 Monday 23rd October 1916: Mr. Edward Gaunt of12 Hartley Road, Luton has heard that his 20 year old son Rifleman Arthur James Gaunt has been killed in France. Rifleman Gaunt was a former Luton telegraph boy who transferred to Harrow as a postman before enlisting with the Post Office Rifles (8th City of London Rifles). This is the third bereavement suffered by Mr. Gaunt in less than a year. His wife Lucy died last autumn, and his ten year old daughter Esther died earlier this year.