Lecture on the Royal Flying Corps 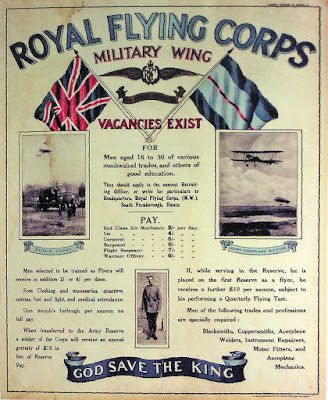 Tuesday 24th October 1916: The boys of Bedford School have enjoyed a lecture by Captain Court-Treat of the Royal Flying Corps on the organisation and work of that organisation. He explained how the Flying Corps was divided up into brigades, wings, and squadrons, with the squadron a complete fighting unit in itself, including a repair shop. Their numbers had increased dramatically since the outbreak of the war. The work of the Flying Corps includes not just fighting the enemy, but also preventing  enemy planes making reconnaissance over British lines. The difficulties of the Flying Corps’ own scouts in spotting important features such as bridges and railways, and in detecting hidden batteries, were explained.

The lecture was illustrated with an excellent series of slides. These included pictures of the flying machines used, the latest being a Curtiss battleplane with two engines and room for five people. There were also photographs of the German trenches, and of other fields of battle ranging from Ypres to a reservoir in Egypt.