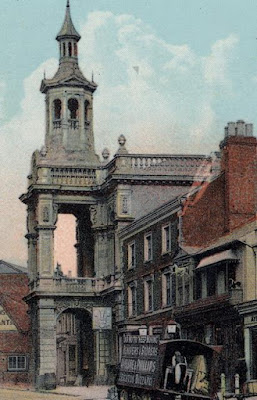 Saturday 22nd July 1916: Belgian refugee Lambert Giebels, who was sentenced to three months imprisonment for theft in May, has appeared in court at Bletchley charged with assaulting a police inspector. After completing his gaol sentence Giebels was taken to a detention camp in London to await deportation, but on Thursday morning he escaped, despite being “scantily clad”. Giebels returned to his cottage at 7 Plantation Road, Leighton Buzzard, but the Leighton police had been informed of his escape and were on his trail. Yesterday afternoon a special constable spotted him walking towards Bletchley with his wife and baby. The constable fetched Inspector Callaway, who told the court that he found the prisoner and his wife in a field. He accused the man of being Giebels and took a pair of handcuffs from his pocket, but when he saw them the prisoner said he would go quietly; however Giebel’s wife got between them, allowing her husband to run away. The Inspector chased him and after a violent struggle the escapee was arrested and taken to Bletchley Police Station. While he was being searched he took a piece of paper out of his pocket, tore it in half and tried to eat it, but Inspector Callaway seized him by the throat and hooked the paper out of his mouth with a finger, getting badly bitten in the process. Giebels was remanded in custody, shortly before two Belgian military police from London arrived in search of him.

Despite this incident, which is most unusual, the people of Leighton and Linslade have great sympathy for the suffering Belgians. The girls of Linslade Council School recently held an open day in support of Belgian Day, which collects money to help Belgian children who are still in their own country. The girls brought cakes, fruit and vegetables for sale, raising nearly £2. They gave a performance of drill, songs and recitations, and two little Belgians sang the French and Flemish national anthems. Altogether the day raised a total of over £4. Two days later the children of the Infants’ School also held an open day for the same cause, which raised a further £1.11s. The Leighton Buzzard Observer has also published an appeal (in French) by Charles Piron, a Belgian refugee staying at the Plume of Feathers Hotel in Lake Street, Leighton Buzzard. On behalf of his son, a prisoner of war, he has asked for help in sending food parcels to Belgian prisoners of war who are unable to receive them from home.