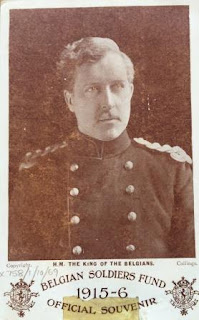 Sunday 19th March 1916: Monsieur Charles Piron, a Belgian refugee who has been living in Leighton Buzzard since June, made an appeal in the Leighton Buzzard Observer last week for a friend badly in need of a waterproof. Monsieur Joseph Pennartz had written to him saying:

"I am in the muddiest hole you could dream of - mud up to the knees, and now snow. Is there possibly some 'fairy godmother' in your district who would be kind enough to send me a waterproof? It is very necessary; we are exposed to all weathers. Please try to find me this 'rara avis'. I am of middle height. I don't ask for anything luxurious, but khaki coloured if possible."

The day his appeal appeared, M. Pennartz was delighted to receive both a splendid waterproof, and a motor cyclist's rubber waterproof and overalls. He was able to send the second gift to another Belgian soldier, Michel Counet d'Aywaille. This young man, still only 19 years old, ran away from his home in February 1915 with eight others, intent on joining the army. As they crossed the Dutch frontier the group was fired on by a German patrol and four of them were killed.  After reaching Holland, the survivors travelled on to England where they joined the Belgian army.

M. Pennartz was a wealthy tobacco merchant before the war, but is now penniless and serving in the Belgian army as a volunteer. M. Piron has a son in Germany as a prisoner of war and was himself lucky not to be executed. The day after he escaped to Holland seven of his friends were shot as spies. A musician, he has delighted local audiences with his playing since arriving in Leighton Buzzard. In a letter of thanks he writes:

"I cannot let pass this opportunity to acknowledge publicly in my name and those of my compatriots, our gratitude to you personally and to the generous givers. We Belgians, particularly those from Wallonie, knew nothing of, or rather did not understand Great Britain. Since the early days of my stay in England I have had reason to appreciate at its true worth the generosity of the British people, and especially of British ladies, - a generosity which is characterised by the sincerity, the discretion, and the great delicacy with which it is dispensed."