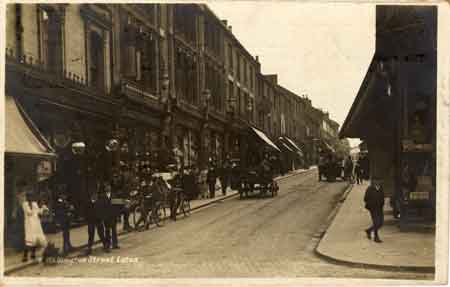 Friday 24th March 1916: Following the block refusal at Wednesday's Bedfordshire Appeal Tribunal to allow those conscientious objectors whose appeals had been refused one of those men, Mr. Harry Stanton has written asking them to reconsider and allow him to take his case to the Central Appeal Tribunal:

From 89 Wellington St, Luton
To Clerk to the Bedfordshire Appeal Tribunal

I believe I am allowed under the Military Service Act to make an application in writing for leave to appeal against the decision of the County Appeal Tribunal within seven days of their decision. I do this, in spite of the fact that a verbal refusal of the right of appeal was given, because the whole number of cases where leave of further appeal was asked were taken “en bloc”

The Act states, I believe, that leave of further appeal should only be granted where the case in question involves a principle which may be typical of numerous other cases. I feel that my own appeal is such a one. The Appeal Tribunal, as did the Local Tribunal, seemed quite convinced that mine was a genuine case of conscientious objection, and I claim that it is one of those termed “exceptional” in the instructions from the Local Government Board, and that I am therefore entitled to absolute exemption. Surely the fact that I refused what was to many the easy way out (of acceptance of work under civil authorities) is a further proof that mine is an exceptional case.

However, I do not wish in any way to decry the decision of the Appeal Tribunal. Although I cannot accept it, I believe it to have been the honest opinion of the Tribunal. My sole object is to establish the fact that a genuine conscientious objector is entitled to absolute exemption if nothing else will meet his case.

May I also take this opportunity of thanking the members of the Tribunal for the very considerate attention and hearing which they gave to the cases of conscientious objection.

If you decide to grant me leave of further appeal, and a special form of application for such leave is necessary, I should be pleased if you would send me such a form by return of post, as I believe the time allowed is very limited.