Provision for Soldiers at Home and Abroad 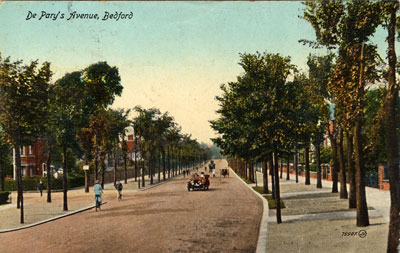 Friday 3rd March 1916: Bedford continues to do its best both for the soldiers billeted in the town and for Bedfordshire soldiers serving overseas. On Tuesday a drawing-room meeting was held at Holbrook, De Parys Avenue to promote the work of the Bedford Soldiers’ Home in Bromham Road. Captain de Winton chaired the meeting and told those attending how much his soldiers, mostly Welshmen, appreciated the Home. The Lady Superintendent, Miss Birney, described the work carried on there, where many men return regularly. A short service – for which attendance was voluntary – is held there every night, which helps many of the young soldiers to lead better, purer lives. Many examples were given of the ways in which the Home benefits young soldiers and of how much it is appreciated. The Home is conducted in such a way that it provides the men with a real home away from home. In response to the need for a second Home a house has been taken near the Barracks, but £200 will be needed by the end of March for the new Home to start its work. A collection was made which amounted to £22 13s, and a number of promises of help have already been received.

Yesterday morning a meeting was held to discuss the provision of comforts to Bedfordshire men serving at the Front. A number of organisations have been working for both the regular and territorial troops, but there are still some gaps needing to be filled, as our correspondent with the Bedfordshire Regiment noted back in December. It was agreed that two Central Committees would be formed, one for Bedford and North Bedfordshire, and a second for Luton and South Bedfordshire. Both will be under the presidency of the Lord Lieutenant and all the existing Comforts Funds organisations will be represented on the committees. The aim is to ensure that every unit associated with Bedfordshire will be sure of an ample and prompt supply of comforts in the future.