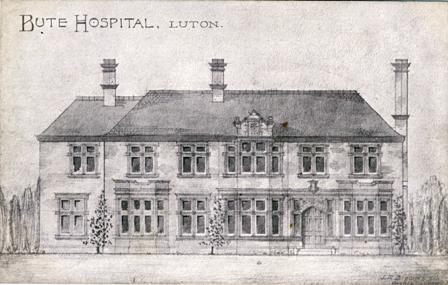 Monday 6th March 1916: Since the war began the number of doctors in Luton has fallen from twenty four to twelve, with the military authorities are still trying to recruit more medical men. The remaining doctors in the town are not only having to cope with their own vastly increased workload, but are also making time to carry out more work at the Bute Hospital. The annual report presented to the Hospital Governors last night shows the following figures for 1915:
The number of patients treated fell from 760 in 1914 due to a reduction in military cases from 256 in that year to 101. These were all serious cases of illness or injury which could not be treated at the V.A.D. Hospital. The soldiers currently in the hospital included one with a fractured spine, one with a broken leg, one with a serious spinal disease, and one with very serious heart disease.

During 1915 the average cost per week per bed increased by 1s 9d to 20s 5d, and would have been higher without the help of Pound Day, the Ladies’ Work Guild and presents of game from Lady Wernher. Last year £300 had been ear-marked for purchasing X-ray apparatus, but this had not been possible due to the demand by military hospitals.

The remaining doctors were aware that their lack of numbers meant they were not doing the work of the hospital as well as they would like, but they were doing their best under difficult circumstances. Their difficulties had been increased by the death of the hospital’s consultant surgeon, Mr Stanley Boyd. He had come to the hospital frequently and at all hours, often arriving by the midnight train to perform an urgent operation before returning to London in the early morning. He was one of the greatest surgeons in London and it did not seem possible that the hospital would be able to replace him with another of similar standing.