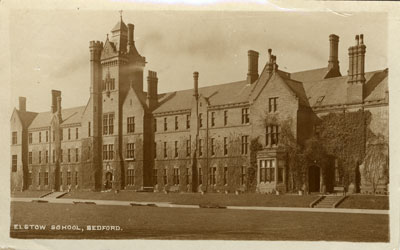 Tuesday 7th March 1916:  An unlooked for effect of the war has come in the announcement that Elstow School is to close at the end of this term. This well known public institution has done splendid work under its headmaster Revd. C. F. Farrar, but it has been hit hard by the recent conditions. Many of its boys have always come from abroad, and the class of families from which it drew its pupils has been forced into stringent economies. Pupil numbers have fallen, expenses have increased, and it has become impossible to fill gaps in the staff.

The County School was founded in 1866 by a number of landowners and others, and a Limited Company was formed in which the Duke of Bedford took shares to the value of £10,000. The school opened on August 16th, 1869, with 70 boys, under its first headmaster Revd. William Groome. By the end of its second year numbers had risen to 330 boys. Revd. Farrar was appointed the fifth headmaster in 1893 and was an assistant master at the School for some time before. In 1898 ownership of the school passed from the Company to Revd. Farrar. During these five years the number of boys at the school had nearly doubled and a number of improvements to the premises and equipment had been made, including the installation of electric light. During his time as headmaster the name was changed to Elstow School. In 1914 it was estimated that over 4000 boys had been educated there. It will be greatly missed, especially by the boys of Bedford Modern School who enjoyed a keen sporting rivalry with the Elstonians.