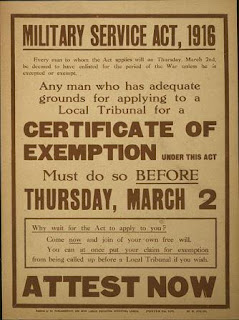 Thursday 24th February 1916: Tribunals have begun sitting in the county to decide on applications for exemption from military service under the Military Service Act. This will come into effect on March 2nd and will introduce conscription; following that date any man between the ages of 18 and 41 who has not yet attested or applied for exemption will be deemed to have enlisted for the duration. Yesterday the tribunal for the Borough of Luton dealt with 45 appeals, sitting from 2.30 until after 8.00 p.m. with only a short break for tea. Most of the cases dealt with men whose labour was said to be essential to a business. In several of these the applications were in respect fo small straw hat factories where there was only a single man left, whose departure would result in closure of the factory. Rather than risk the sudden loss of a number of these small businesses disrupting this important industry, the tribunal granted temporary postponements to allow them time to wind up their affairs. One gentleman wrote to withdraw an appeal he had made on his son’s behalf, explaining he had managed to make alternative arrangements and his son had already enlisted. Another applicant asked for postponement until April saying “I do not want any favours. We have to beat the Germans, and I wish I could go as well as this young man”.

The first meeting of the Leighton Buzzard Tribunal took place on Tuesday evening to consider applications under both the Military Service Act and the voluntary Derby Scheme. A batch of nine applications came from Messrs. Bullivant and Co., wireworkers for their employees; they were all exempted as they are engaged in government work, even though most are young, single men. A farmer and a blacksmith were both exempted as they are in reserved occupations. The case of a clerk said to be indispensable to a decorator and the only son of a dependant widowed mother caused much discussion. The application asked for him to be placed in a later group [1], but this proved not to be possible and the application was refused. Another contentious case was that of Ernest James Saunders, the surveyor and sanitary inspector to the Leighton Buzzard Urban District Council. The advisory Committee decided he should serve and the surveyor himself wished to join the forces. However, the Council argued forcefully that his work made him indispensable and a postponement was granted.

Source: Luton News, 24th February 1916
[1] Under the Derby, or Group, Scheme, men were placed in groups according to age and marital status and the groups were called up in a fixed order.
Posted by Kathryn at 07:00