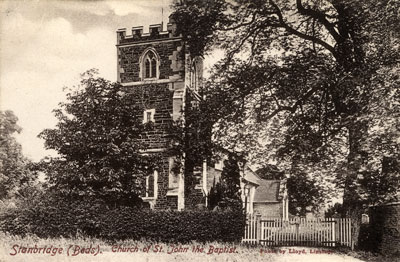 Saturday 20th July 1918:  The wedding has taken place today in Stanbridge Church of Corporal Will Jones to Miss Violet Dockrill, the niece of Mr and Mrs John Dockrill of Stanbridge. Corporal Jones is home on leave recovering after being wounded for a second time in Italy. A number of other men from the villages of Stanbridge and Tilsworth are also recovering from recent wounds. Private Reginald Stairs is staying with his sister at Dunstable while on sick leave. He was badly hurt and lost a leg at the first battle of Gaza, where he was left on the battlefield with two dead men on top of him for some hours before being picked up by an ambulance. He had previously been wounded in Gallipoli. Private Philip Mead, who also recently had a leg amputated, underwent another operation last week and is making favourable progress. Just a few weeks after his father joined up, Private William Gurney has been badly wounded in the foot and is in now hospital at Bournemouth. Also recovering from wounds are Private Frank Price, son of James Price of Manor Farm, Tilsworth, and Corporal Charles Horn, who had returned to the fray after suffering wounds at Vimy Ridge last year.