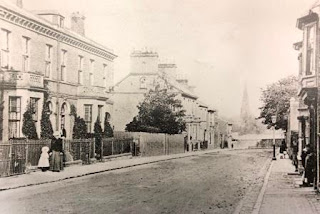 Wednesday 7th November 1917: Three Russians have been fined for failing to report a change of residence to the local police while lodging temporarily in Linslade. Mrs. Rebecca Rosdensky, aged 41, of Walden Street, near Commercial Road in the East End of London, was staying at 2 Sunnyside, New Road, Linslade.[1] When Inspector Walker visited the property on Saturday 6th October to inspect the lodgers’ registration forms he found Mrs. Rosdensky’s name filled in as Rebecca Rose. She told him she had been there since 29th September and was returning to London the next day, which she then did without registering. Her employer said she had not been out of London since the beginning of the war and no idea it was necessary to register. She has lived in England for twenty five years.

Mrs. Rosdensky’s mother Leah Shaps, and Annie Goldstein, aged 13, of Hunton Street in Spitalfields, were also staying at 2 Sunnyside, and both were summoned for the same reason. All three of the Russians were fined 15 shillings and sixpence, including costs, for their breach of the alien registration regulations.

[1] Although the newspaper report gives the address of Sunnyside as New Road, it was in fact on the corner of Old Road and Station Road. In the late 19th century the house was used as a school. In 1900 it was sold and was subsequently divided into apartments. It has since been demolished and Lara House now stands on the site.
Posted by Kathryn at 07:00