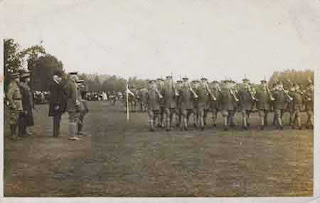 Sunday 18th November 1917: The Bedford Volunteer Regiment will be holding a parade and inspection today. The parade will begin at the Corps Headquarters in Ashburnham Road at 2.30 pm. The Volunteers will march via Midland Road, the High Street, and the Embankment to Russell Park, where they will be inspected by the Lord Lieutenant. The exercise had originally been planned as a joint parade of both the Bedford and Luton Battalions, but the shortage of railway facilities and other factors made it impossible to bring the Luton Volunteers to Bedford to take part. It is hoped that this parade will help in the recruitment of new volunteers. The establishment strength of the Battalion is 1,000, but the numbers currently enrolled are 550 at Bedford and 660 at Luton. If the Bedford Battalion cannot be brought up to full strength then there is a danger that the Bedford and Luton Battalions will be merged. Badged and exempted men, and men over the age of 41 are eligible for the Volunteer Corps. Anyone interested in serving in this way can obtain information from the Battalion’s Headquarters.