A Sugar Rush at Bedford 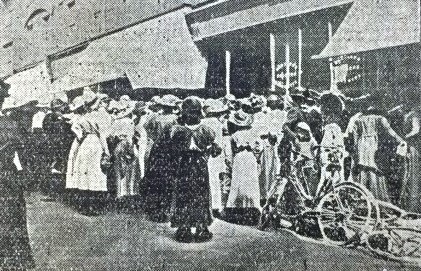 Thursday 6th September 1917: Yesterday morning a rumour spread that a grocer in Bedford’s High Street had a quantity of sugar for sale. The shop was soon besieged by would-be purchasers and a lengthy queue formed. By 11 a.m. the shopkeeper was obliged to close the door, but the crowd around the shop continued to grow. Some left during the dinner hour, but by 2 p.m. the number of sugar hunters was larger than ever. Those who had managed to secure a prime spot in the doorway were “most inconveniently crowded” and P.C. Smith had difficulty keeping the crowd in check. The pressure from behind eventually caused a large side window to be smashed. The crowd remained until 3.30 p.m. when an announcement was made that no more sugar was available, after which the waiting shoppers dispersed quickly and quietly.