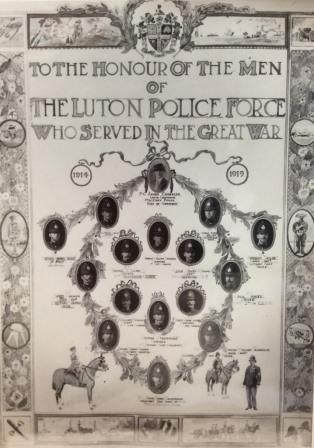 Saturday 1st September 1917: Bombadier Alfred H. Goss, a former member of the Luton Police Force now serving with the Heavy Trench Mortars, is at the Bath War Hospital suffering from trench fever. He writes that he is “getting on favourably” and has sent some verses of his own composition to the Luton News for publication. These include the following:

Having been a soldier
For fifty years or more
I’ll tell to you a story
Of the Kaiser and the war.
He has a great big army,
There’s not the slightest doubt,
With all his guns and all his men
He can’t knock Tommy out.

There’s our “contemptible little Army”
Out in old Flanders now,
And how to stand and hold his ground
Prince Rupert doesn’t know how.
He uses his best tactics,
And shock troops he inspires;
He can’t stop our artillery
Or the lads behind the wires.