The Marsh Family of Luton

Wednesday 1st August 1917: An 19 year old Luton soldier has been dangerously wounded in the leg, just two days after returning from home leave. Private Arthur P. Marsh, the son of Mr and Mrs. George Marsh of 30 St Ann’s Road, Luton, is now in a base hospital in France with his leg broken by a piece of shell, but says he is “keeping on smiling”. Private Marsh was so anxious to join the Army that he enlisted in the Bedfordshire Regiment in 1914 aged just 16. He was previously wounded at Ypres, where he lost a finger.

Arthur is not the only member of the Marsh family to enlist while under age. His brother, Albert, now aged 18, fought at the Somme for four months before his age was discovered and he was sent back to England. He is now back in training with the Bedfordshire Regiment. Their elder brother George, aged 25, served in the Territorials for six years before the outbreak of war. He was initially rejected for Army service, but rejoined a year later. He is now in Egypt with the Norfolk Regiment and has recently been promoted to corporal. Before the war both George and Albert were employed by Messrs. Brown and Green Ltd.[1] 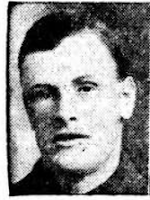 The brothers’ father, Mr. George Marsh served with the Colours for just over a year but was then discharged through medical unfitness. He now works at Messrs. George Kent Ltd. It seems the family inherited their patriotic instincts from their grandfather, who was a Crimean War veteran.

[1] Sadly Albert and George did not survive the war. Albert died on 1st February 1918 and was buried at the Luton Church Burial Ground. Corporal George Marsh was killed on 11th December 1917 and was buried at Ramleh Cemetery near Tel Aviv in Israel.
Posted by Kathryn at 07:00