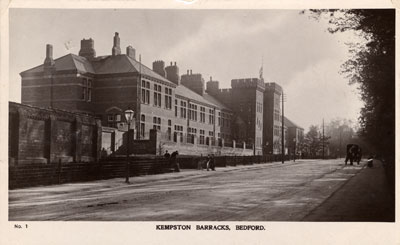 Saturday 18th August 1917: Private Christopher Augustus Cox of the 7th Battalion of the Bedfordshire Regiment has spent this week at the regimental depot at Kempston after returning from home leave at Kings Langley (Herts). Two weeks ago he was invested with the Victoria Cross by the King, as a reward for his courageous actions at Achiet-le-Grand in March; these were described by our war correspondent https://bedsatwar.blogspot.com/2017/03/great-bravery-and-successful-attack.html at the time. At breakfast in the central mess room Private Cox was introduced to all the men in the depot and was given an enthusiastic ovation. A tall and well-built man, wearing the VC ribbon and three gold wound stripes, he looked the picture of health. He told his colleagues that he was recommended for the Victoria Cross for bringing in a party of men under heavy fire on the battle field, but was too modest to go into detail. He reported that when the King pinned the Cross on his tunic His Majesty extended his hand to him in a friendly manner and said “Cox, you are a brave man and I am glad to shake hands with you. I hope you will have a long and happy life” [1]. 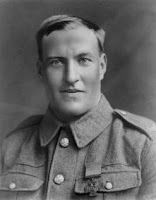 [1] Christopher Augustus Cox died in 1959 at the age of 69. He was wounded in the foot in May 1917 and was not fit enough to return to the Front; he spent the remainder of the war training recruits.
Posted by Kathryn at 07:00