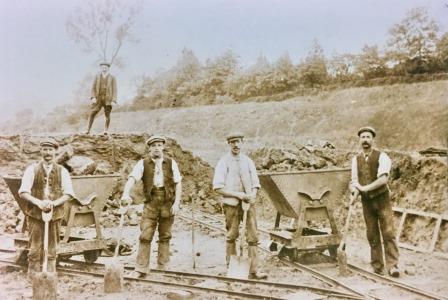 Wednesday 15th August 1917: A verdict of accidental death has been given at an inquest into the death of Arthur George Watson, who fell into a sand pit and drowned while gathering wildflowers. The twelve year old London boy had arrived in Leighton Buzzard on Saturday with his mother to stay with her brother at 18 Stanbridge Road. After dinner on Sunday Arthur and another boy were sent to Page’s Park. His mother told the inquest that about half an hour later the second boy came home and said “Help, Sonny’s in the water”. When she rushed to the pit she could not see her son, only his cap lying on the bank near the bushes. He had brought her some flowers that morning and had said he would bring her some more. He had suffered from infantile paralysis [polio] which had affected his hands, but he had the use of his arms. They had come to Leighton Buzzard for a holiday because the bombs in London had upset her. The last thing her husband said to Arthur before they left was “Don’t go near the water”.

George Edward Charles, aged 8, who was also on holiday with his mother at 18 Stanbridge Road told the inquest that he, Arthur Watson and some other children went out for a walk and were told to go to Page’s Park. Sonny, as Arthur was known, had said “Don’t go there; it’s a rotten old place, and the bulls run after you; come to the sand pits.” When they got there Sonny left them sitting on the gate to go and get flowers for his mother. He fell near the water and called out “George”. The boy ran to him and found his friend in the water up to his waist. He got hold of him and dragged him onto the sand, then ran home to tell the boy’s mother. By the time he got back Arthur was in the water and could not be seen. There were boys on the other side of the pit but when he called to them for help they said they could not swim.

Due to the difficulty of dragging the pit Arthur’s body was not recovered until the following day. A police officer said that when they began dragging the pit there were no marks on the bank, but the middle of a big bush of flowers of the type the boy had been gathering had been broken down as though something had fallen through it. There was also a bush floating in the water to which the lad had apparently been clinging. The banks of the pit were treacherous due to running sand, and there was no proper path. It would be almost impossible to get out where the boy fell in because of the steep bank. The pits were fenced off from the road and the lads were really trespassing. Both the Coroner and the police thought it would be very difficult to keep boys away, as if they were prevented from reaching one pit they would go to another. P.C. Cheshire said that this year people had gone “fishing mad”, with even the munitions girls going fishing.