Complaint Made Against German Teacher 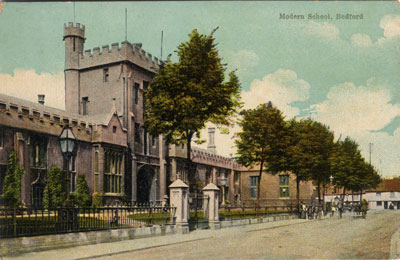 Tuesday 29th February 1916: During an outburst of anti-German feeling in Bedford last May, moves were made to have Dr. M. L. de la Motte Tischbrock,  the naturalised German teacher at Bedford Modern School removed from his post, despite the protestations of the headmaster Mr. Kaye and the support of his pupils. To the annoyance of Mr. Kaye, information has now been deposited with the military authorities against the teacher. He writes with feeling to the informer:

“My dear Bradly[1]. To my intense surprise I have been officially informed that you have “laid an information” against Dr. Tischbrock to the military authorities here. I cannot conceive why, if you thought the information worth givein at all, you did not give it 18 months ago, nor why you have done it without a word to me. I have had a most difficult and delicate position in the matter, and this “evidence” ought to have been dealt with – whatever view one takes of it – at the beginning of the war, or at latest when the question of Dr. Tischbrock’s position, like that of other aliens, was first raised. Raising it now is to me inexplicable, but it certainly does not make the situation easier for me.”

Mr. Kaye has been asked by an officer of the 68th (Welsh) Division, now based in Bedford, to keep him informed if Dr. Tischbrock decides to go to America, or if he gets any other information about him which could affect the case.


[1] No further information is given and it has not been possible to identify the informant. Dr. Tischbrock was forced to leave the school, although it is not clear at what date. Writing in the 1970s a former pupil said: “Hounded from B.M.S. in spite of Mr Kaye’s protests, he obtained for a brief spell a post at Manchester Grammar School. But becoming stone deaf, badgered from pillar to post, he turned to market gardening in Surrey, and met with a fatal accident when attempting to take too much of his produce to market on a bicycle. I do not know the year of his death but I am told that his widow died only recently at a very great age” [BMS/CWK/98/3; Tischbrock’s wife Lily died in 1971].
Posted by Kathryn at 07:00