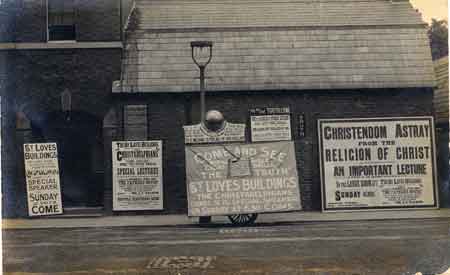 Saturday 26th February 1916: Today the Luton Tribunal has heard the cases of a number of conscientious objectors who have asked to be excused from military service. Some of these men are employed at munition factories; as a result the Tribunal was very sceptical of their cases, considering that if a man’s conscience forbade him taking the life of another in battle, it was odd that he was content to make his living producing weapons for other men to use. A Christadelphian appealed to the principles of his religion which caused him to oppose war, but was told to stick to tangible facts as to why he should not become a soldier. He agreed that he was working for a firm which produced items for the Government, but argued that as a civil clerk employed by a civil firm he could leave if he was ordered to do anything which went against his conscience. It was pointed out that although the company did not make munitions, they did make vehicles which were part of the supply chain for shells to the trenches. He requested that if the Tribunal decided to refuse his application it should state its reasons for refusal in writing and made clear his intention to appeal to the Appeals Tribunal in the event his application was rejected.

One of the applicants stated that he absolutely objected to being made to kill his fellow men, and that he had a horror of killing animals or even insects. He would not even kill a spider he found in his room. He argued that if everyone held his opinion Germany would never have gone to war – he was told to consider that “if all English people held the same opinion there would have been no war, for Germany would have been over here”. Asked if he objected to killing vermin, he replied that he had never had any vermin on him; after further questioning he admitted he might kill rats or mice under exceptional circumstances. He also stated he would not like Germany to win as they were “the worst of the civilised nations of Europe”, but did not think it possible that they would. His application for exemption was refused.