A Tragic Month for Stondon 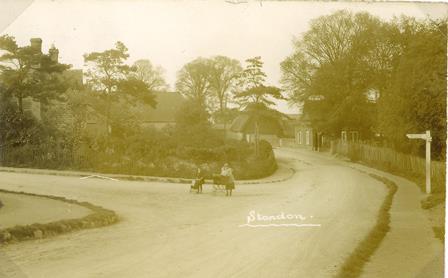 Sunday 27th February 1916: The Rector of Stondon writes that the village has suffered a series of tragedies during the past month:

“I am sorry to say that our village has been visited by the Angel of Death, no less than four out of our few inhabitants having been taken from us. First we heard the sad news that one of our brave soldiers at the front, Private Fred Peck [1], of the 2nd Beds Regiment, had succumbed to his wounds in hospital; then we heard that Private George Covington had been killed at the front. Violet Mary Jordan, only 15 years of age, died almost suddenly while staying at Luton, and last Monday one of the best-known and respected of our villagers, and who had lived here all her life of 68 years, Mrs. John Cooper was laid to rest in our pretty little Churchyard. Such sad events as these bring home to us the uncertainty of life, and bid us take care that we are prepared for that time which must inevitably come some day to each one of us. These three young lives, gone as it were in a moment, should be indeed a warning to us all."

Frederick William Peck, aged 20, was the son of William and Nellie Peck of Bird-in-Hand Cottages, Lower Stondon. He was wounded, along with another Stondon soldier, Private Leslie Cooper, when a shell exploded in their billet. Although Private Cooper’s wounds were initially thought to be more serious than Private Peck’s, the latter died on 5th February 1916 while Private Cooper is now said to be progressing favourably. He has been moved from the Princess Christian’s Hospital at Weymouth to the St. John’s Red Cross Hospital and writes “Pleased to say I am still going on fine, soon hope to see you all”.