Poor Start to the Recruiting March 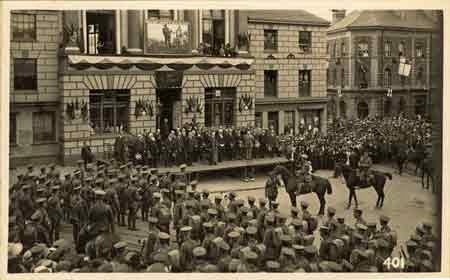 Tuesday 25th May 1915: The first few days of the 2/5th ’ recruiting march have not been a success. The first big disappointment was met at Shillington. Although the village has already given the lives of two of its men, there are many who have been slow in coming forward to join the army including about seventy young unmarried men who appear to have little justification for refusing to serve their Country. However, despite the best efforts of the recruiters to persuade them, not a single volunteer came forward. Indeed, the whole day produced only a single recruit. The next day was slightly more successful, with five or six recruits coming forward at Harlington. The quality of the young men in the 2/5th Battalion can be seen from their speed on the march from Barton to Streatley, when they completed 1¼ miles in 22 minutes, despite carrying full equipment and rifles on a very hot morning.

When the recruiting march arrived at on Saturday afternoon the troops drew up outside the Town Hall and were welcomed by the Mayor who wished them a successful visit to the town. On  Sunday morning there was a Church parade on the Moor, followed in the afternoon by a concert at Wardown. The battalion band was to have given the whole concert, but as they are primarily a marching band and have not been together very long, they contributed only a couple of short sessions to the programme, which was mainly performed by the Luton Red Cross Band. The gathering at planned for Monday morning was cancelled and the recruiters marched to Caddington where they expected to find about fifteen young men who might be persuaded to enlist. Unfortunately, although they found the men playing football on the green when the recruiters were spotted they disappeared. Although the soldiers pursued them to the cottages and public houses, none could be persuaded to join up. By last night after five days on the road, including three in , the recruiters had succeeded in persuading only twenty men to enlist.

Yesterday evening Captain F.W.F. Lathom spoke at the Grand Theatre, Luton and his comments on the poor response received so far triggered cries of “Shame!” and “Conscription!” from the audience. Captain Lathom’s comments on the young men of Shillington and Caddington in particular were extremely caustic. He read out a letter received from a major on General French’s staff which he hoped would make them realise how necessary it was for every man who was able to do his duty to come forward: “The people of are dreadfully to blame. The apathy, indifference, and levity of the people in makes the hearts of us who are out here feel sick. One feels as if one was being stabbed in the back all the time – as if one’s worst enemies are one’s own people. It’s awful! The and , strikes, and drink at home; bullets, shells, and poison gas here! Can nothing rouse people? Does nobody realise that we are fighting for our very national existence … there are no Derbys in Germany, no strikes, no one with his hands in his pocket and a cigarette in his mouth and a newspaper in his hand … the duty of those directly engaged in manufacturing war material, on building ships, on loading ships, on digging coal, and so on, is plain. So is that of every able-bodied young man who is medically fit to enlist”.

Captain Lathom’s passionate appeal, which was repeated at other places of amusement, met with some success and by the time the marchers left this morning the number of recruits had risen to thirty-eight.