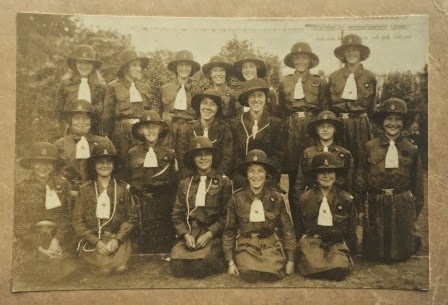 Monday 24th May 1915: The Bedford Companies of Girl Guides were kindly permitted by the District Commissioner Mrs F. Jean Trustram Eve to hold their first public parade in the garden of “Rushmoor” in this afternoon. The Girl Guides were founded by Lord Baden-Powell in 1910 and the movement was started in at a patriotic meeting for girls last November. Four of the five Companies which took part in the parade came from this initiative, and the fifth is attached to the Y.W.C.A. There are now 133 Guides enrolled, and 114 have passed their tenderfoot and are now official Guides. Of these 99 took part in the parade, together with 13 officers.

The Companies marched onto the parade ground at 3pm in a hollow square formation and were inspected by Mrs Trustram Eve, accompanied by the Companies’ officers. Following the inspection each Company in turn performed a drill in the middle of the square. The Commissioner then gave a short speech on the Girl Guides’ motto “Be Prepared” and just how important this was in order for everyone to do their part in the War. She explained the different badges which can be earned and announced that it was hoped that there could be an outdoor camp on the next Bank Holiday with campfires and cooking competitions. The Companies then marched past the Union Jack at the salute and were given tea on the other lawn.

Most of the Guides were dressed in their uniform, which is a dark blue skirt and blouse, a brown belt, a blue tie, and a dark blue felt hat. Each patrol is named after a flower, which is embroidered on the pocket, and the Company number is added to the shoulder strap. Not all the recruits have yet received their uniform, and some Companies do not yet have sufficient funds to buy their belts and other equipment, but considering how short a time they have been running they have done extremely well to look so smart.

Mrs Trustram Eve has issued an appeal for funds to support this fledgling movement. She says that the girls are encouraged to pass tests in ambulance, cooking, dressmaking, path-finding and many other useful accomplishment. The keen sense of competition between the companies ensures that all members try to avoid untidiness and other forms of slackness. While the members are doing their best to raise funds for their immediate needs, help is needed to meet expenses such as the hire of halls for drill and subscriptions are sought from all who have the welfare of girls at heart.

Source: Bedfordshire Standard, 28th May and 25th June 1915
[1] The Girl Guides were founded in 1910. The BLARS catalogue for the Bedfordshire Girl Guides collection (reference X698) says that Girl Guiding first took root in Bedfordshire with formation of the 1st company which was registered at Guide Headquarters on 11th May. This article makes it apparent that Girl Guide companies existed in from November 1914.
Posted by Kathryn at 07:00