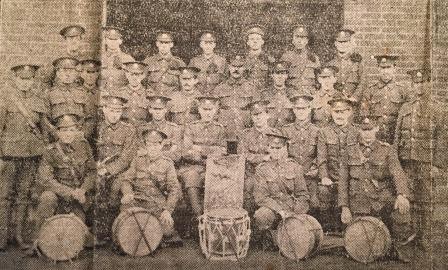 Thursday 20th May 1915:  Six officers and 144 men of the 2/5th Battalion of the Bedfordshire Regiment, led by Major Richard Rouse Boughton Orlebar [1], have begin a three week recruiting march through the county. This battalion consists of Imperial Service men who are unable to go to the Front, in most cases because they have not reached the qualifying age of 19.The aim of the march is to recruit 500 men and raise a new battalion which will become the 3/5th Battalion of the Bedfordshire Regiment; this Battalion will be used to reinforce the 1/5th Battalion when it gets into the firing line. The marchers travelled by train from , where they are billeted, to Baldock. From there they began their march accompanied by both the bugle and brass bands of the battalion; they will be stopping today at Stotfold, Arlesey, Henlow, and Shillington. The recruiting party is expected to arrive at on Sunday and will spend the Whitsun Bank Holiday there. The Lord Lieutenant Mr. Samuel Whitbread has issued this appeal to the public:

MEN, JOHN THE NEW BATTALION.
MOTHERS, LET YOUR SONS GO.
SWEETHEARTS, PERSUADE YOUR BOYS.
ALL JOIN IN AND HELP.

The march is scheduled to take 22 days and to cover a distance of 226 miles; the soldiers will be billeted in the towns and larger villages and will visit the smaller villages en route. It is scheduled to end at on Friday 11th June. Those wishing to enlist need not wait for the recruiters to arrive. They can sign up at any time either at the Luton Corn Exchange, where recruiting officers have been located, or at the battalion’s headquarters at .

[1] The husband of Faith Orlebar, commandant of Hinwick House Hospital
Posted by Kathryn at 07:00