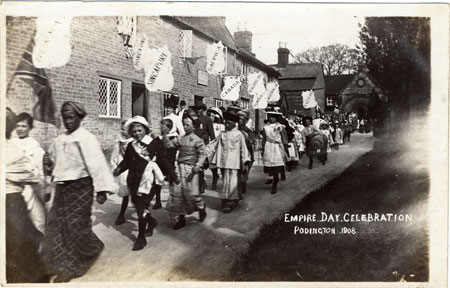 Wednesday 24th May 1916: Empire Day has been celebrated today in schools across the county. At Dunstable Road School in Luton the celebrations were presided over by the Mayor and Mayoress, and attended by a number of honoured guests including one 16 year old boy who, despite his age, has returned wounded from the Front. The children sang hymns and choruses, and the Mayor gave a speech explaining the meaning of Empire and its stand for right and justice. At Christ Church Infants school each child wore a daisy, the emblem of the Empire, and most wore red, white, and blue ribbons and carried flags. They sang patriotic songs including “Rule Britannia”, and the top class entertained the others with a game of soldiers and nurses. The soldiers had rifles and marched in order to battle, while the Red Cross nurses, wearing aprons, caps, and crosses, bandaged up the wounded. In the afternoon the children made daisy chains.