Restrictions on Canteens at Bedford 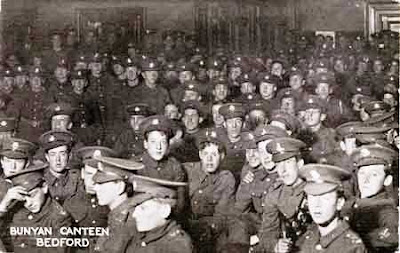 Wednesday 13th February 1918: Following a meeting called by the Mayor of Bedford, canteens serving soldiers in the town have been asked to restrict the amount of meat and margarine that they use. Canteen managers have now submitted returns showing that in one week soldiers consumed 160 lbs of margarine, 3500 lbs of bread, 183 gallons 3 quarts of milk, and 225 tins of condensed milk – all in addition to their normal rations. A proposition that a letter should be sent to the Army authorities by the Bedford Food Control Committee expressing alarm at the amount of bread and milk being consumed by soldiers was carried. There was also concern that soldiers were using restaurants in the town. This was considered unfair when they were already receiving more rations than civilians and it was suggested that restaurants should be put out of bounds. Instructions had been received by the Food Control Committee that sugar certificates were to be withdrawn from caterers and canteen, with stock to be held by the committee. Tea was also of concern, but supplies were coming in very gradually.