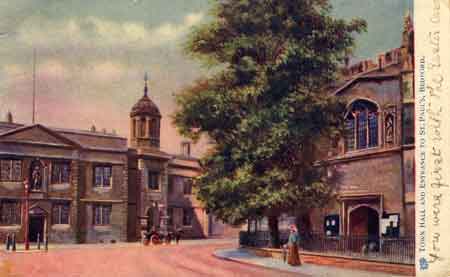 Thursday 12th December 1918: Mr. and Mrs. Walter Grant of Rose Mount, Clapham Road, Bedford, have received the sad news their son Charles Alfred Richard Grant has died in France of pneumonia brought on by influenza. He joined a Mechanical Transport Company of the Army Service Corps in 1915, served for three years without being wounded, and was expected home for Christmas. An old boy of Bedford Modern School, he was an expert swimmer and played regularly for the Bedford Rugby Football “A” team. After joining the Army he became honorary secretary of the Mechanical Transport Rugby Club and arranged a match against an Australian XV which raised a large sum for the Lewisham Red Cross Society. Before the war he worked for nine years as assistant auditor in the Finance Department of the Bedford Corporation. In a letter of sympathy the Town Clerk writes:

“By his death the Corporation have lost a good and faithful servant, and I a valued friend. His work at the Town Hall left nothing to be desired. His painstaking, careful, and accurate work stands recorded in the books of accounts at the Town Hall for many years, while his courtesy, strict attention to his work, and  his willingness to assist anyone who needed help or advice endeared him to all in the office. His example was always for good, and he maintained strictly the good reputation of the Town Hall staff. Such a man will be hard to replace indeed. He will always be remembered by the whole staff with affection and esteem.”

A memorial service will be held for him at Holy Trinity Church this afternoon.