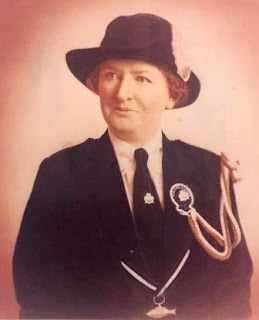 Friday 6th December 1918: The 1st Leighton Troop of the Girl Guides, which was started in May by Mrs. Reeve of “Athelney”, Albany Road, has held its first enrolment meeting in the Church Room at Leighton Buzzard. Thirty six smart and enthusiastic guides paraded before the County Commissioner and the District Commissioner for North Bedfordshire, giving a well-trained and disciplined display of drill and marching. Unfortunately the proceedings were disrupted by the bad behaviour of a number of children who live near the hall.

The officers of the troop were formally invested with badges and colours by the County Commissioner, Mrs. Lawson Johnston. The newly enrolled Captain W. Flemming in turn enrolled two patrol leaders and two corporals. The company sang songs, demonstrated marches and dances, and signalled a greeting to the County Commissioner – who confessed that despite the best efforts of her daughter to teach her she had not managed to learn to read signals. In an address to the Girl Guides she reminded them that they had a great responsibility, especially the older girls, to help to train their younger sisters to be good girls and good citizens. She asked them to maintain the very high standard they had set themselves as Guides, and to show people who knew nothing about the work what it meant to be a Guide by their behaviour. She ended by telling them to “always be jolly, but also remember their responsibility and duty to their homes and their parents”.