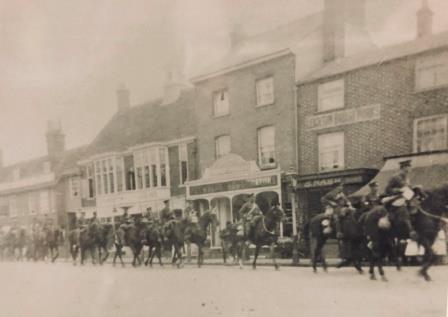 Friday 4th January 1918: Further news has been received of the action in Palestine during which Lord Rosebery’s younger son, the Honorable Neil Primrose M.P., was killed and Major Evelyn de Rothschild of Ascott House fatally wounded. During this war the tradition of charging the enemy on horseback has largely disappeared, but the two cousins were killed in what must surely be one of the last cavalry charges in the old style.* Captain John Douglas Young M.C. of the Royal Bucks Hussars writes:

“We have made two charges, which are being talked about all along the line. We charged in line over two miles of perfectly flat plain, swept by shells and machine gun fire. Our men and horses were mad with excitement. The enemy, about 3,000 strong, were in an almost impregnable position, on top of a long and very steep ridge, 200 feet high. We went straight to the top and into them. We captured all their machine guns, enormous quantities of ammunition, two guns, and 1200 prisoners, and we never stopped to the count the dead.”

During the second charge  “We went part of the way dismounted, and then led our horses up, and charged again. Probably if we had not we should have been wiped out, as they outnumbered us six to one. But they hate the sight of our swords, and just as we reached the crest of the mountain (at least it looked like a mountain) they cleared. It was a wonderful sight. Neil Primrose was killed in the last charge, and Evelyn Rothschild (since dead) was dangerously wounded in the first. We buried poor Neil this morning. He was a very gallant fellow.”

* The charge of the 6th Mounted Brigade at El Mughar in Palestine on 13th November 1917 was indeed the last great British cavalry charge, although later charges took place in Syria in 1918 with Indian and Australian troops.
Posted by Kathryn at 07:00