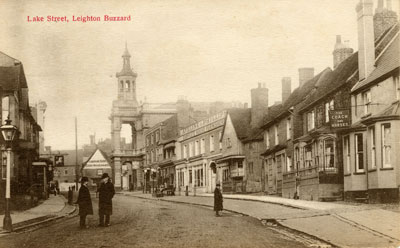 Thursday 10th May 1917: Fundraising events have been taking place in Leighton Buzzard today to raise money for the work of the Leighton Buzzard War Hospital Supply Depot. Two concerts and a dance have been held at the Corn Exchange in Lake Street. The most unusual part of the programme was a sale of fashionable and model hats, including a number of “creations” presented by local well wishers. Many of the hats were bought for high prices then returned to be raffled, making this a very profitable enterprise. Extra funds were raised by a flower stall in the vestibule arranged by Mrs. Garside and by a refreshment stall run by Mrs. Phillips helped by a number of depot workers. Highlights of the concerts were performances by Captain H. H. Cobb, a specialist in coster impersonations; a party of Pierrots known as “The Frolics”; and Mr. W. V. Robinson, a Canadian entertainer popular in the London Halls, who played the mouth organ [1]. The evening’s dancing was accompanied by a military orchestra from Bletchley. Since opening in March last year the Leighton Buzzard War Hospital Depot has sent to British and allied hospitals over 20,625 items, including garments, dressings and bandages.

[1] Mr. Robinson also took part in last year’s garden fete in aid of the same cause
Posted by Kathryn at 07:00