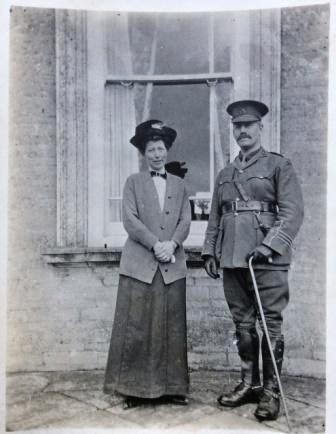 Tuesday 29th December 1914 (Podington): Mrs Faith Orlebar has received another letter of thanks from another former patient at Hinwick House hospital, Private C. Clark. He says:

“I am pleased to tell you that we all got Home quite safe and comfortable, but we did not get very long, 8 days, and that is not long enough so I am going to see how my arm gets on and then if it is any worse I will apply for more leave. I hope the other seven boys are all right and enjoying their motor rides and nice walks which I should like to have now, but there is no young ladies, they have all gone for nurses.[1] Give my best wishes to all the girls and I hope to se them again if I go out and get wounded which I expect will be the next thing.”[2]

She has also received a letter from her old friend Mrs Edith Craven of Hove in Sussex thanking her for her Christmas greetings.[3] She says:


“it was very interesting to hear how this awful war is affecting your and your surroundings. It is most useful work Rouse has got started at the House - & it must be a joy to our Tommies to find such appreciative interest.  … One can hardly realize that we are actually living in the time of the ‘Great War’ of which so much has been said for years, though owing to the barbarian Germans everything is far more terrible than anyone could imagine! God give us Peace in the coming year!”

[1]  The transcript of the letter is annotated “The children and governess used to take the men for walks at Hinwick”.
[2] Another note tells us that the girls were “Hinwick House servants, one of them a widow of 47”.
[3] Apparently Edith Craven (nee Sartoris) who was originally from Rushden.
Posted by Kathryn at 07:00