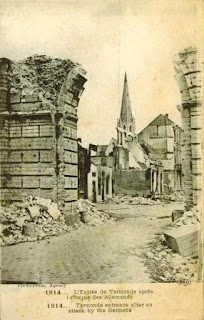 Saturday 30th March 1918: Lieutenant-Commander Robert Francis Crossman, of the Royal Naval Division, the great-nephew of Mr. J.W. Crossman, Chairman of the Bedford Conservative Club, has just returned to England after three years as a prisoner in Germany. He was captured by the Germans at Manbeke in Belgium after the evacuation of Antwerp, suffering from shell shock and an injury to the head. While waiting to have his head dressed he was ill-treated by his captors, and was placed in a camp at Halle “where the food was uneatable and the sanitary arrangements deplorable”; the prisoners were not allowed to smoke for two months, and many of the parcels which came for them from England were taken by the guard. They were moved to a camp at Hugustabad where they were treated comparatively well. In the winter of 1916 he attempted to escape with six other officers. They spent 6½ months digging a tunnel 72 yards long, which went underneath the main road and came up near an ice shed outside the camp. They crawled through the tunnel to freedom, but it was short-lived as they were discovered by a sportsman’s dog while hiding in a wood. The escapees were locked up together in one room for two days, then taken to Gustrow Camp for 14 days solitary confinement. About a week before the escape attempt he had cut the top of one of his fingers, and blood poisoning set in. When he reached Switzerland he had to have his finger amputated.

Note: Although the report does not give the reason for Lt-Commander Crossman’s return to England, it is likely that it was as part of an exchange of incapacitated prisoners.
Posted by Kathryn at 07:00