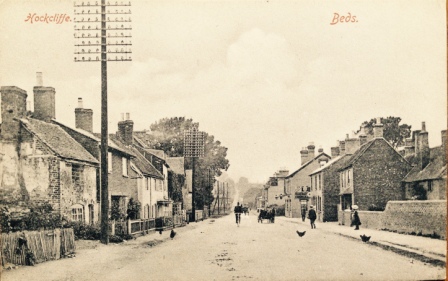 Wednesday 8th August 1917: A minor car accident has caused the death of Sergeant Herbert Henry North, the landlord of the Bell Hotel at Hockliffe. Sergeant North had served with the Bedfords during the South African War and rejoined the regiment for the present war. On Friday he was given seven days’ leave and was offered a lift from Kempston Barracks to Hockliffe by two Leighton Buzzard men. Although the car was only a two-seater all three men squeezed into the front seat, with Sergeant North on the outside near the door. Near Milton Bryan some partridges flew into the front wheels; without waiting for the car to stop, Sergeant North jumped out, apparently intending to run back and fetch a bird. However, when he jumped he lost his balance and apparently hit his head on the road. A doctor was fetched from Aspley Guise and the sergeant was taken home in an army ambulance that happened to be passing. His wife, Lizzie North, was out shopping when her husband was brought home; she returned to find him on the bed unconscious. He recovered slightly on Saturday, but died on Sunday afternoon.

Mr Ernest Heady, a motor car proprietor of Bridge Street, Leighton Buzzard, gave evidence at the inquest that Sergeant North had said “There are some birds down; pull up and I’ll get them”. He had told him to wait until the car had stopped and  slowed; when the car was almost at a standstill Sergeant North opened the door and stepped off in the opposite direction  to that in which the car was going. Mr Heady saw him lying in the road. He spoke to him but could not get an answer so went for the doctor. He thought Sergeant North was in a hurry to get the birds as he thought they were only stunned and wanted to pick them up before they got away. He was known to most of the jury as a very excitable man. P.C. Racher of Eversholt said he was on duty on Woburn when Mr Heady drove up and told him of the accident. He returned to the spot with Mr Heady and found the soldier lying at the side of the road in a pool of blood. The doctor who attended Sergeant North at home said there had been an extensive haemorrhage from the injured man’s left ear and he concluded he was suffering from a fracture at the base of the skull in addition to concussion. The jury returned a verdict of accidental death.