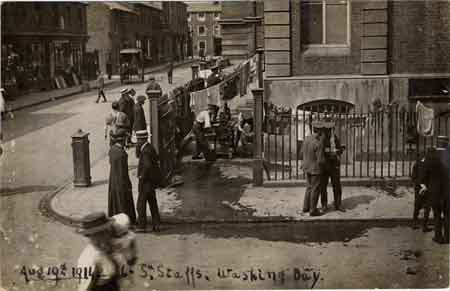 Thursday 28th June 1917: A case has been heard at the Luton Borough Court in which Edith S. Osborn, a young wife with two infants, claimed maintenance arrears from her husband Walter Henry Osborn. She had married Osborn while he was billeted in Luton at the beginning of the war. He was wounded in action at Ypres and discharged from the army. There were allegations that he had been very cruel to his wife and she was granted a separation order with payment of fifteen shillings a week. Mr. Osborn is now in London, and sent to the Police Court Missionary (Mr. Hawkes) a letter complaining of his poverty-stricken state, saying he did not know when he would get his next pension allowance. He admitted that he received 35 shillings a week, but said he “could not have got about unless a gentleman had given him a pair of trousers” and that his boots were in holes. His wife told the magistrates that her father, who was a naval pensioner was keeping her. The Mayor was reluctant to send her husband to prison and adjourned the case in the hope that Mr. Hawkes would be able to do something for the Mrs. Osborn.