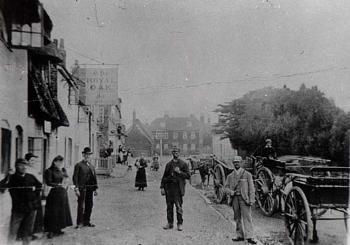 Monday 12th March 1917: Woburn has lost two more men to the War. The family of Christopher Robinson of Woburn has been notified that he has died while held by the Turks as a prisoner of war. Before the war he was India, and was sent from there to Mesopotamia. He was taken prisoner at Kut last year while serving with General Townsend’s force, and had not been heard of since.[1]

The parents of nineteen year old Private Bert Indge have heard that their son was fatally wounded last month. They received the following letter from Private Berry, formerly the licensee of the Royal Oak at Woburn:

“I feel I must write and tell you how sorry I am for your loss. Bert was in the same company as I, so that I used to see him every day. I shall miss him very much, as he was the only one from Woburn in the battalion beside myself. He was a good lad and was always cheerful, and his Sergeant, who was killed the same day, always spoke well of him. I was not in the fight myself, as I have been one of the company cooks since Christmas, but I saw Bert’s mates when they came out. They told me he did not suffer any pain, and that he died with a smile, and I hope it may be some consolation to you know that he died happy.”

At the Woburn Cottage Hospital Rifleman Thomas Bramall, a Warrington man serving with the King’s Royal Rifles, has succumbed to his injuries. His foot had been amputated, but he recovered enough to be able to get out again. However, septic poisoning set in and he died with his parents at his bedside. The Duke and Duchess of Bedford have sent them their sympathy.

Two more Woburn men have answered their country’s call this month. William Cook, who has been through a training course at Ampthill Camp and has now reached the age of eighteen, and Mr. Fred Clapham, the rural postman for Eversholt and Tingrith.  has joined the army. His postal duties are now being carried out by two young ladies from Woburn.

[1] Christopher Robinson died on 6th September 1916, and is buried at the Baghdad (North Gate) War Cemetery in Iraq.
Posted by Kathryn at 07:00